The race begins on a side street in the small town of Dossenheim approximately five kilometers north of Heidelberg on the edge of the Odenwald and ends at the same spot some fifty hilly kilometers later.  The course is a single large loop conjoined with a smaller loop that spurs off to the north of the main loop.  The course, per “Der Hexer’s” (Race Director Michael Frenz) standard procedure is an unmarked maze of hiking and farm paths and single track that flow through the Odenwald.  Navigation is accomplished via GPS and map.  Runners enjoy more than 2000 meters (6561 feet) of quad busting elevation change over the course of the trail.  Planned as a winter season opener conditions can vary from snow and ice to sunshine and moderate temperatures.  Did I mention that a Stairway to Heaven is included? 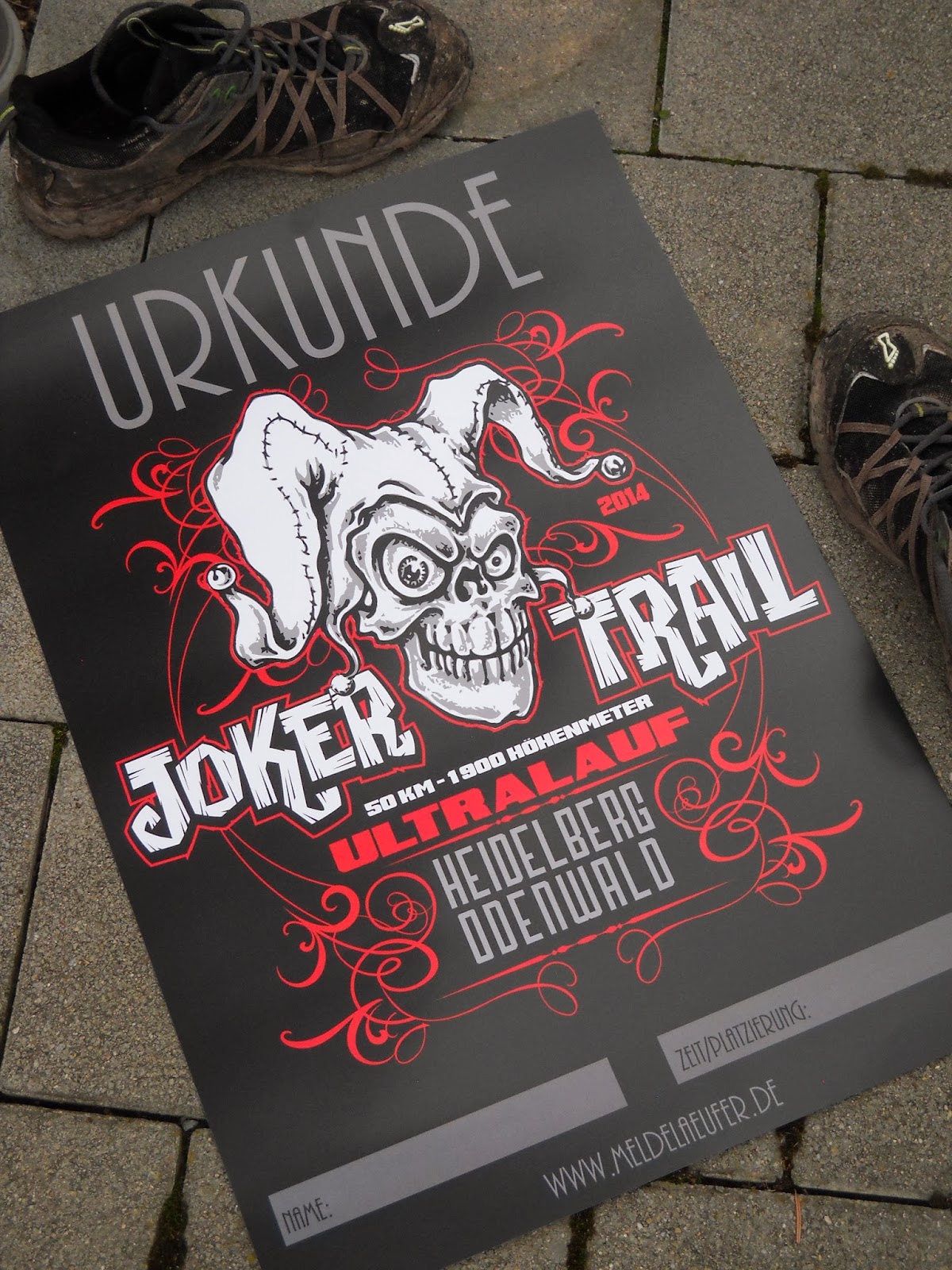 On 21 February approximately forty-eight runners and guests arrived in the village of Dossenheim at the Hotel Goldener Hirsch for check in, the race briefing and dinner.  We drove up from Stuttgart Friday evening after work to find the Goldener Hirsch filled with excited runners and a super meal.  You could tell from the outset that Michael had put together yet another fantastic event.  Race participants and guests were billeted in the Hotel Goldener Hirsch and Zum Heidelberger Tor which is a five minute walk from race headquarters.

Saturday morning we had breakfast in the Zum Heidelberg Tor and then casually walked to race headquarters for the start.  Start time in 2014 was scheduled for 0830 – easy day with nine and a half hours to complete the course!

At 0835 Micha completed the start count down and forty-eight of us took off to moderate temperatures and sunshine.  We would enjoy sunshine, wind and a bit of rain over the entire day.

The initial phase of the course took us from Dossenheim to Heidelberg.  You could characterize this portion of the course as relatively easy at least to the Himmelsleiter.  Surfaces were mixed tar, hard pack, cobble stone and forest trail.  We dropped down into Heidelberg along the Philosopher’s Walk and then briefly ran along the right side of the Neckar River until crossing just below the Karlstor. 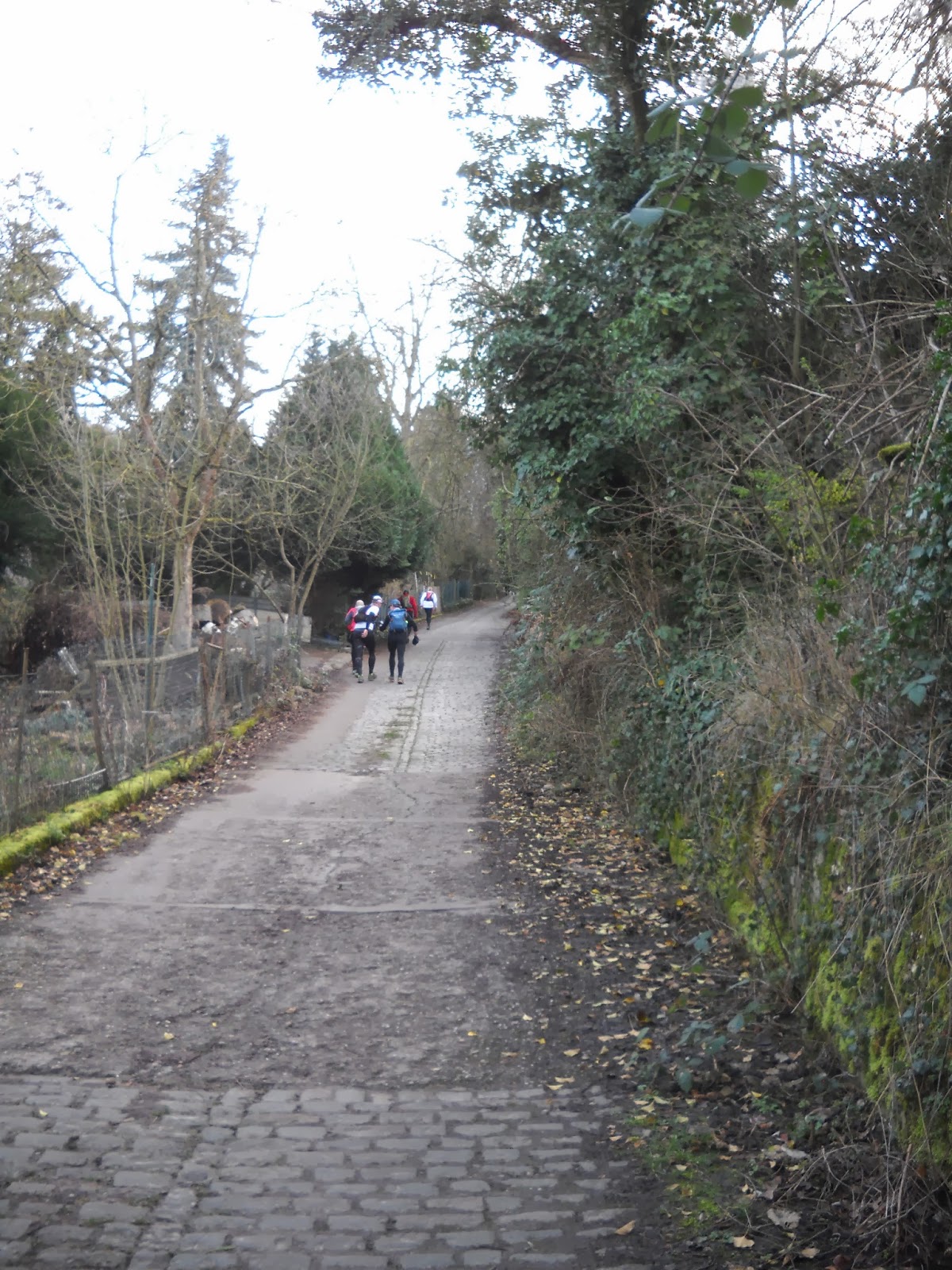 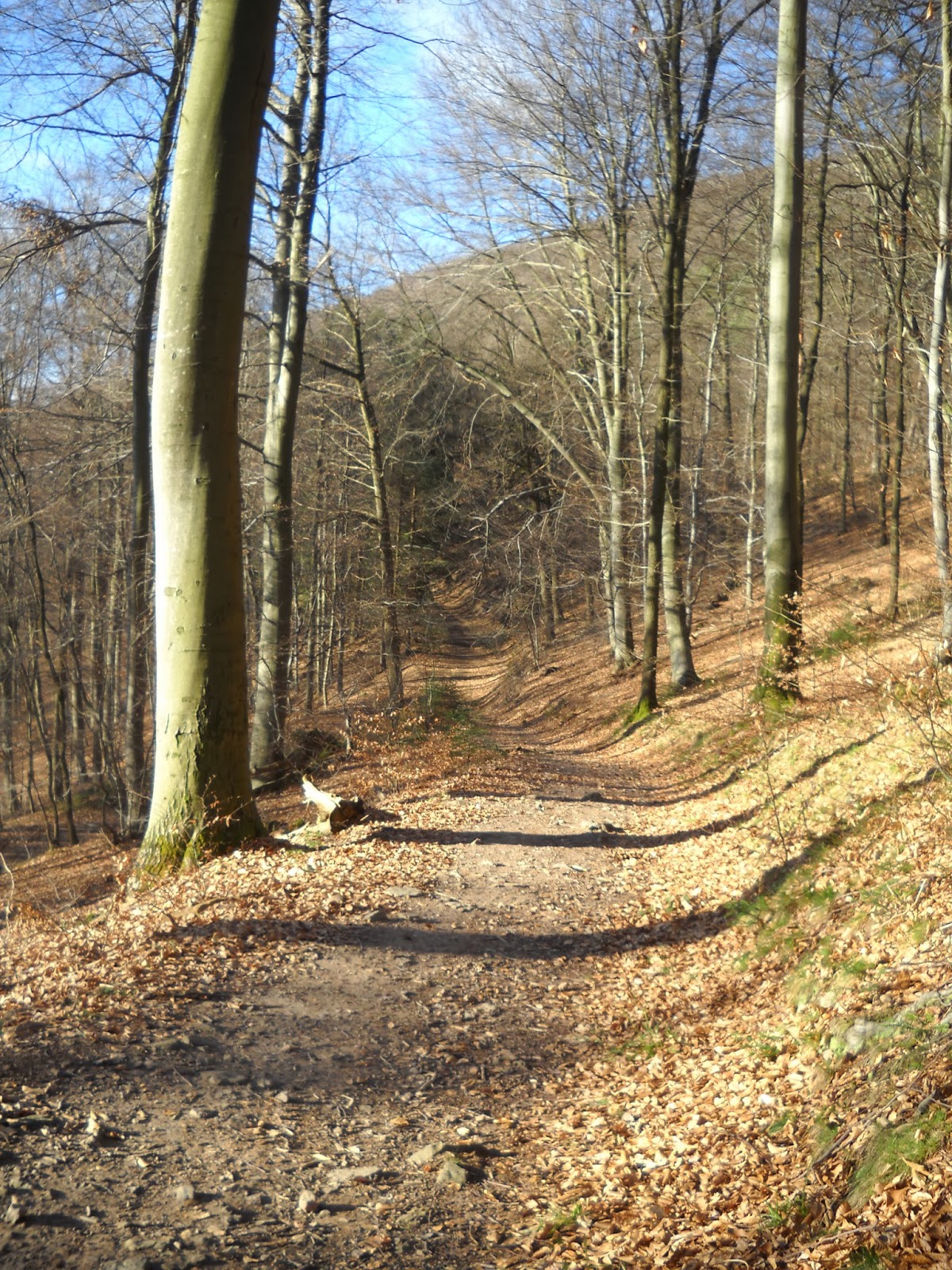 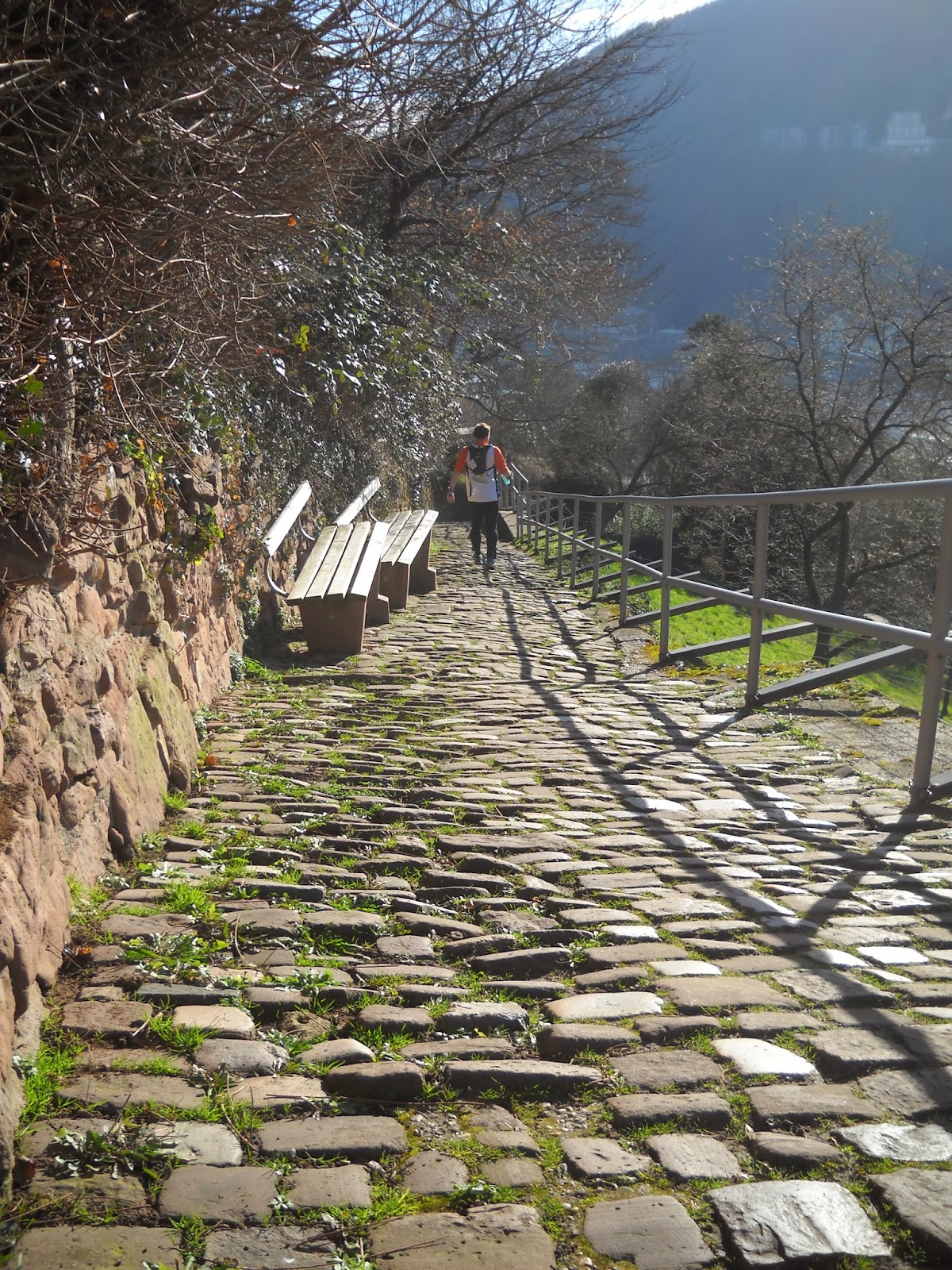 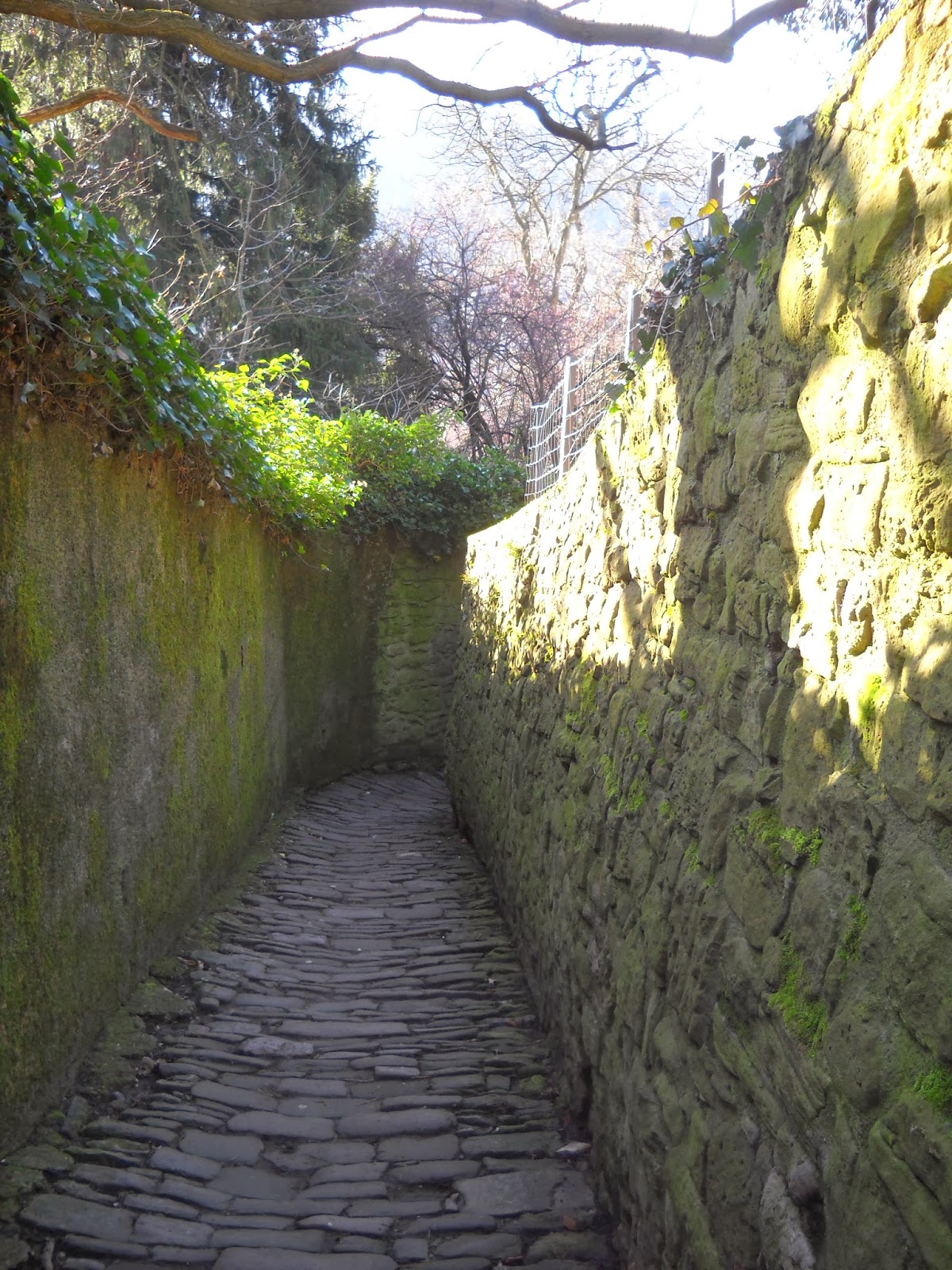 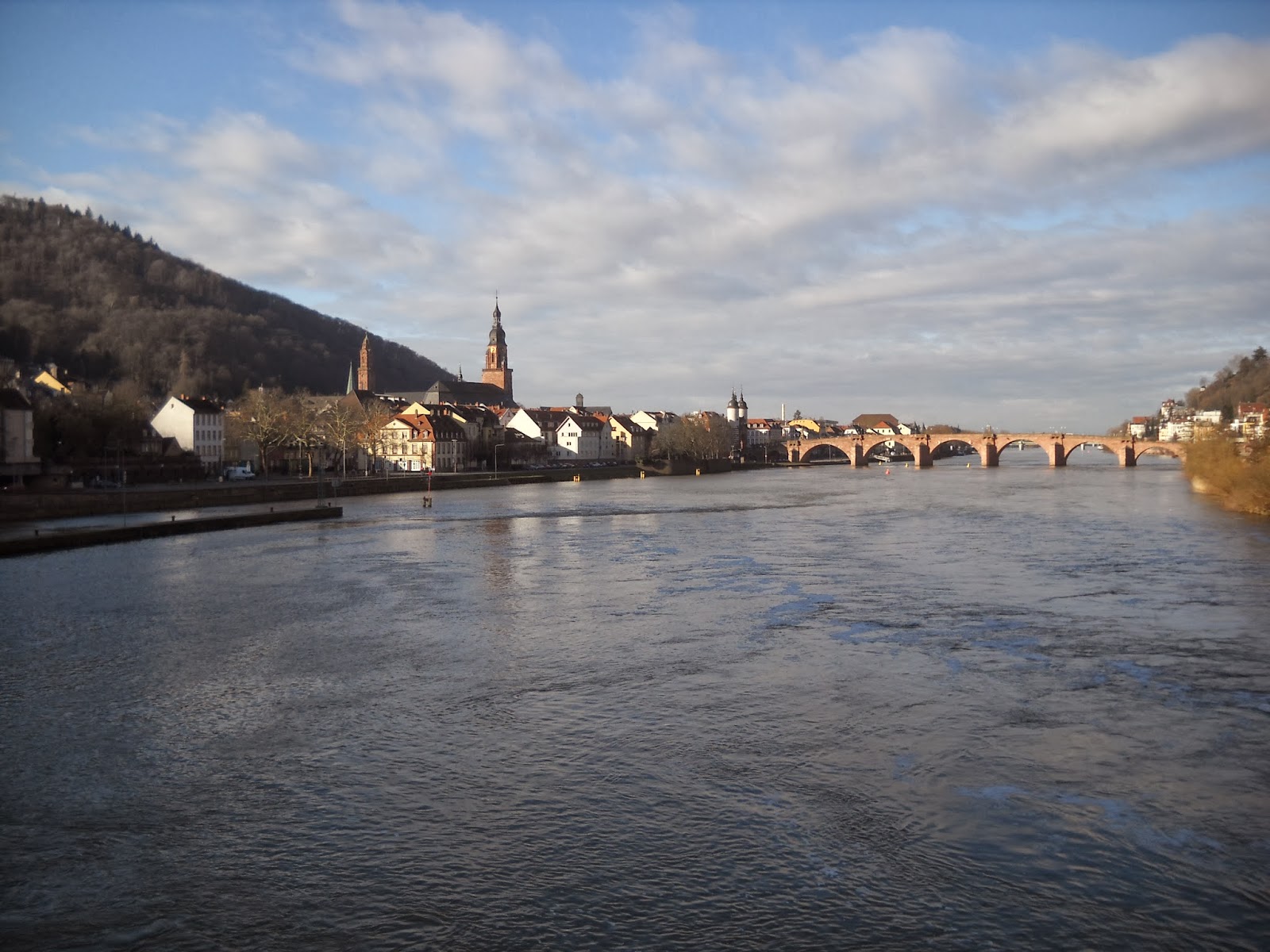 From the Karlstor we took a nice left hand turn and progressed up to the Heidelberg Castle.  Yeah!  I lived in the Heidelberg area for almost six years and never knew that there was an additional stairway to the Königsstuhl known as the Himmelsleiter, my Stairway to Heaven.  Starting at the Heidelberg Castle the Himmelsleiter includes more than 1200 stairs composed of uneven sandstone steps going up 270 meters (885 feet).  The stairway from the base near the Karlstor to the Königsstuhl is composed of a total 1,600 steps.  The Empire State Building has 1,576, but I digress! 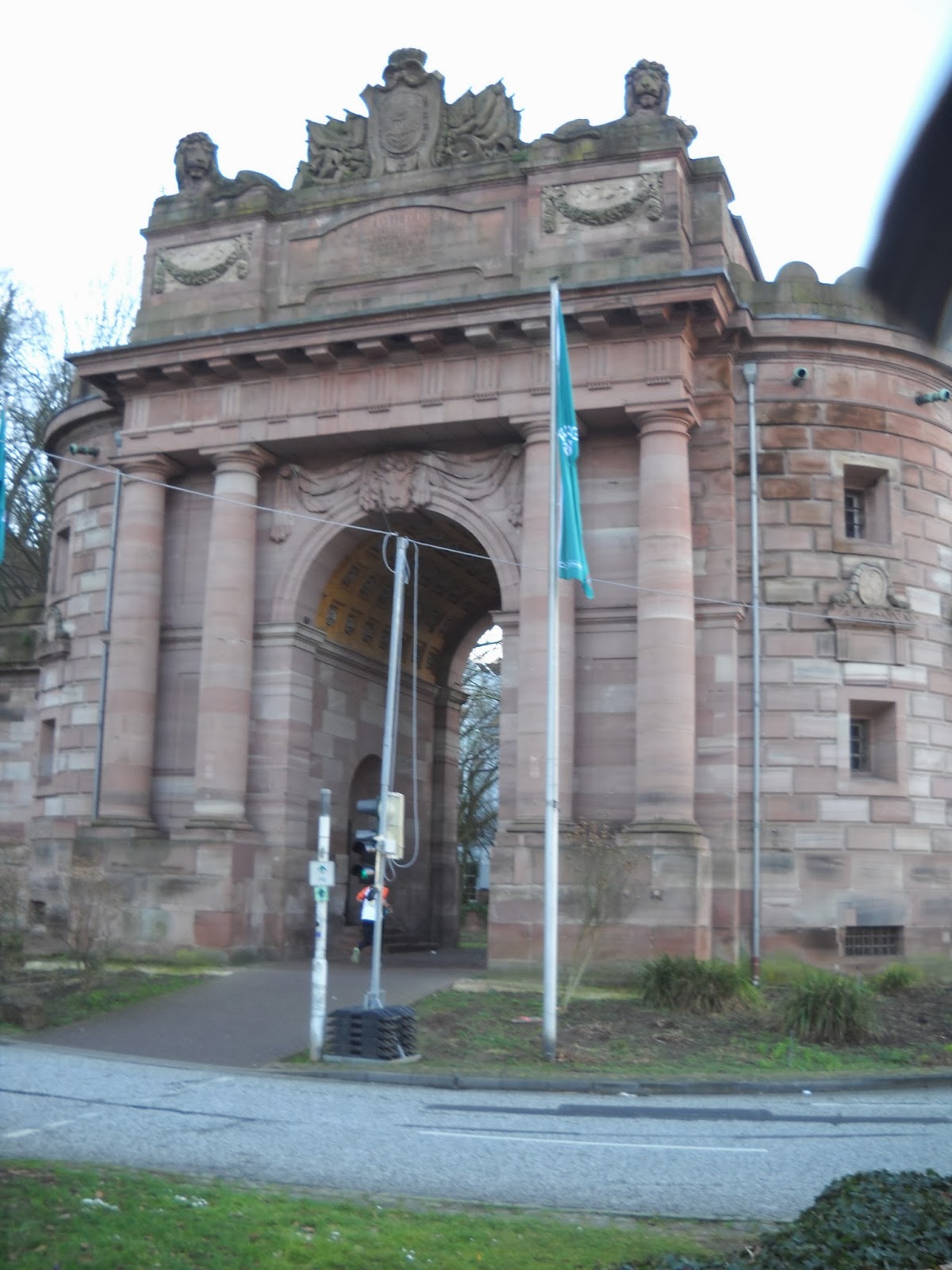 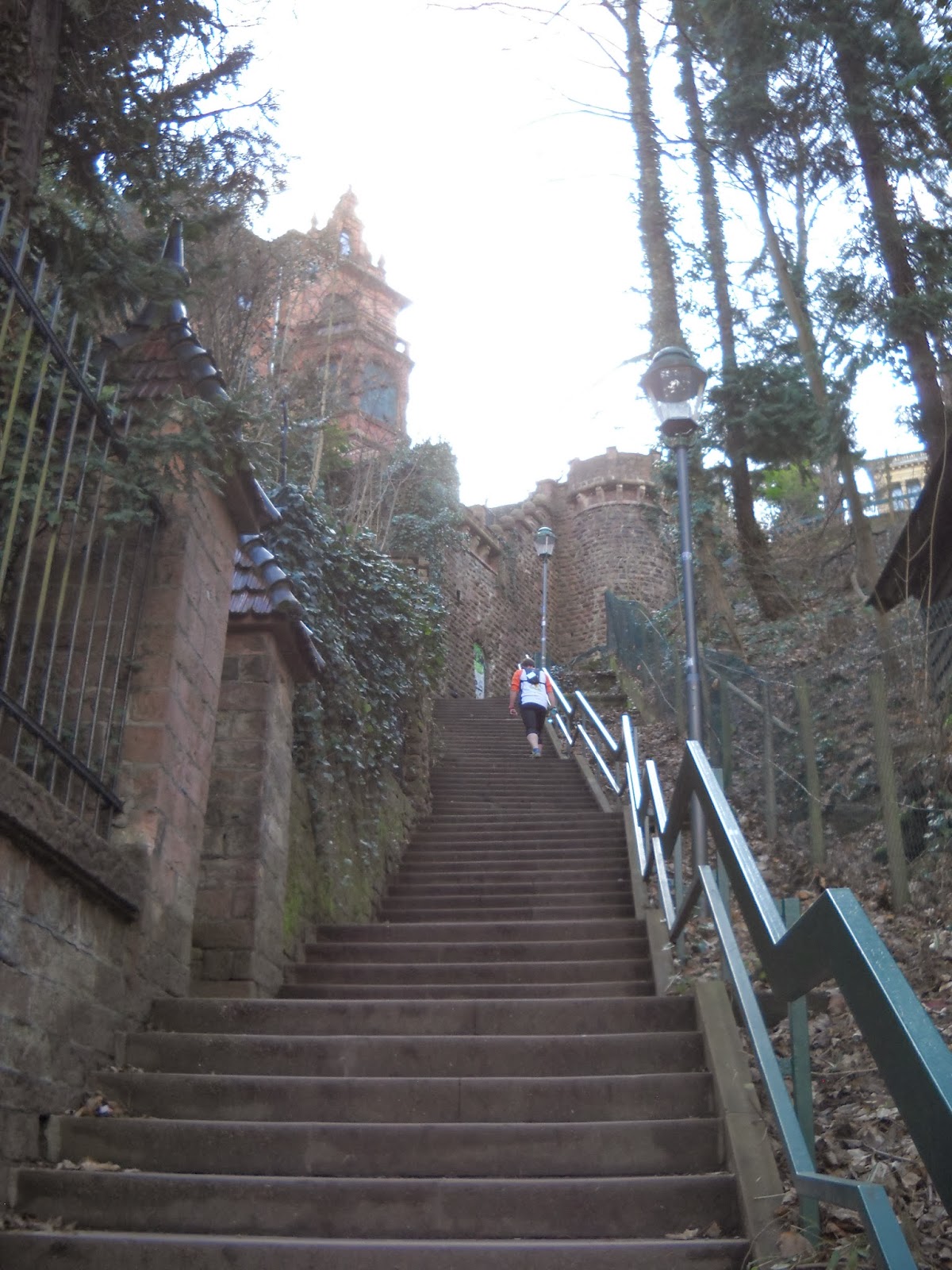 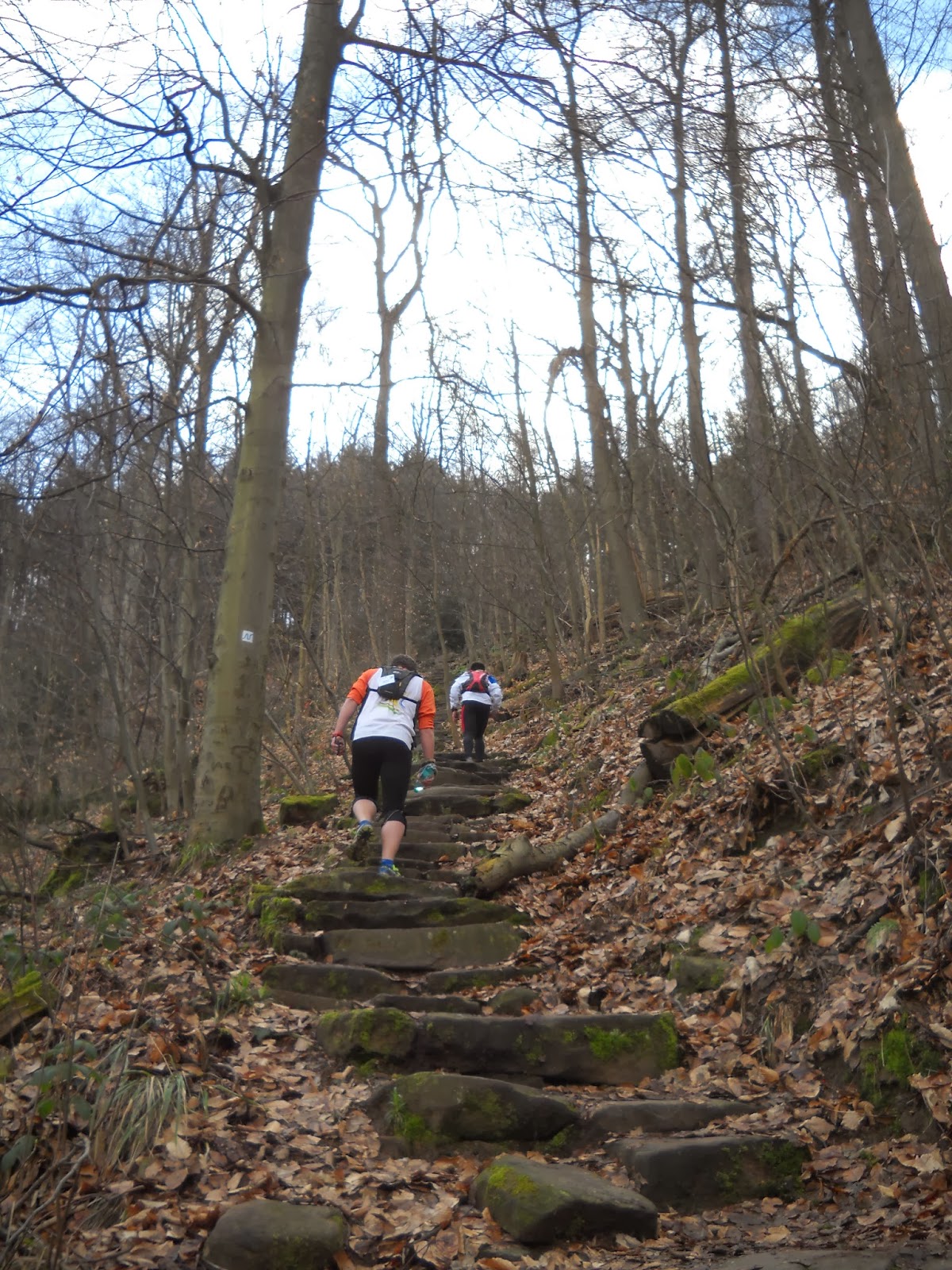 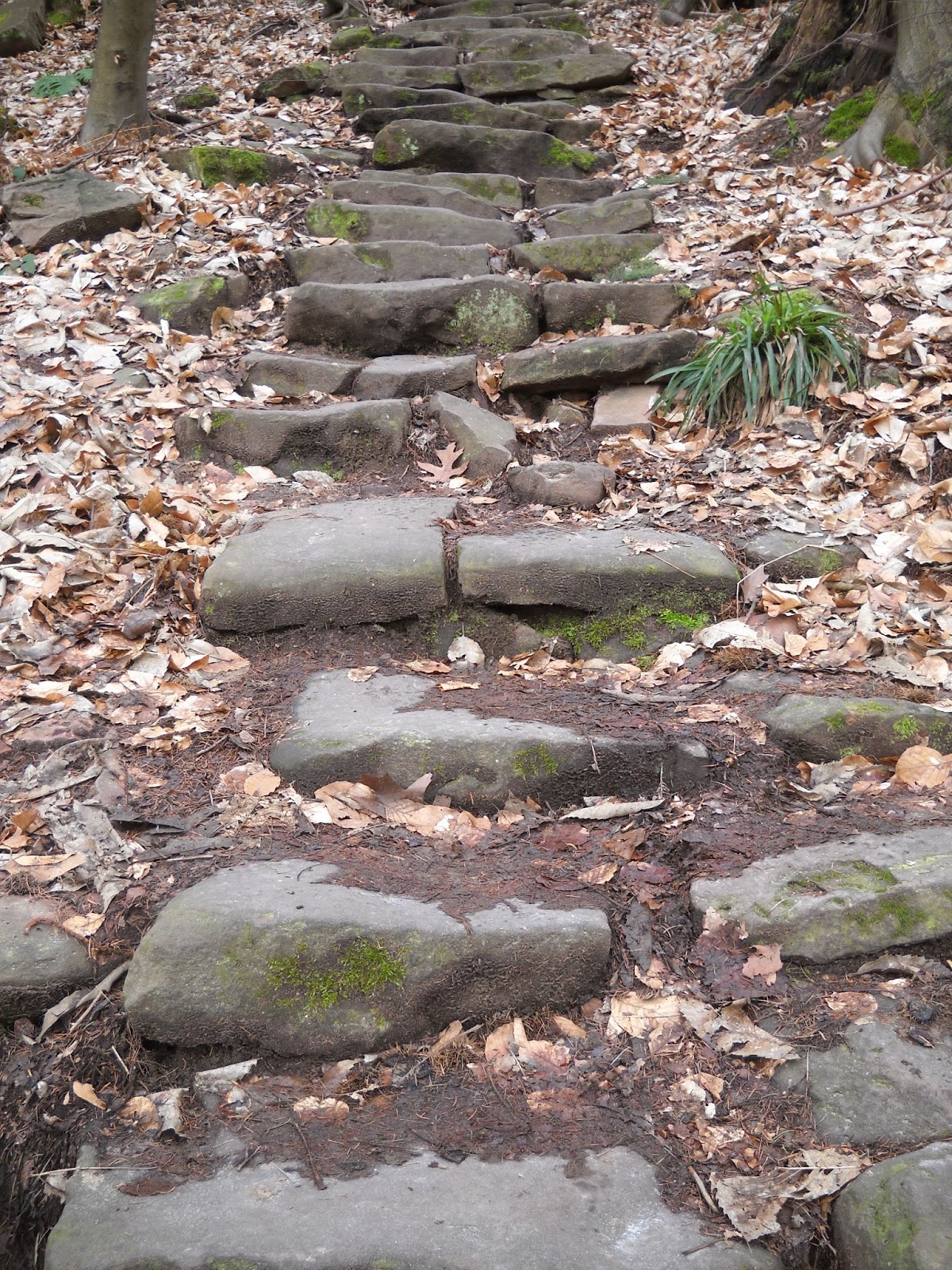 Traveling from the Königsstuhl to Ziegelhausen was a joy.  The course was composed of hiking trail and single track.  I got slightly misoriented traveling along the Lindenhang because of some downed trees – all good; we were going down hill. 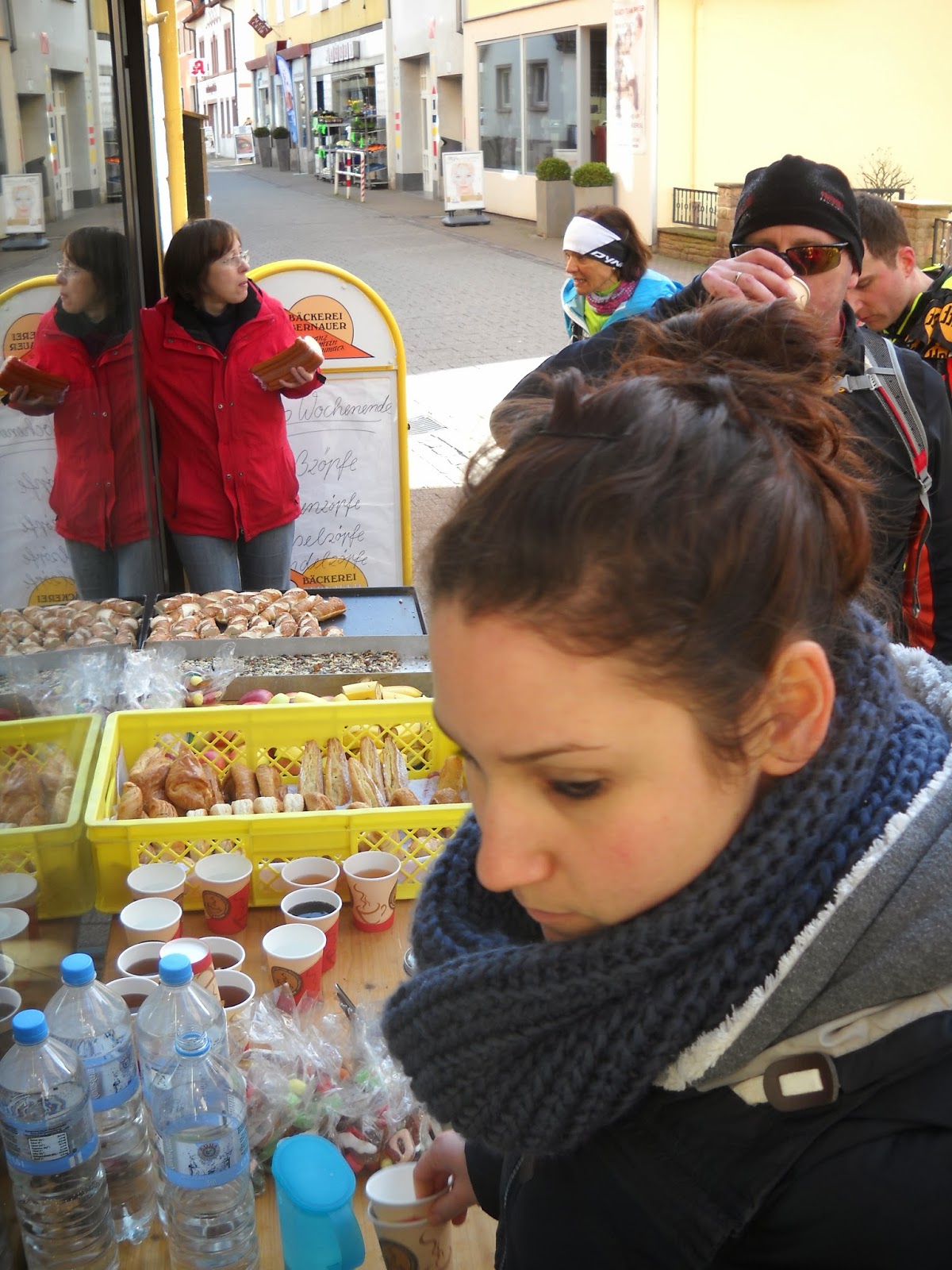 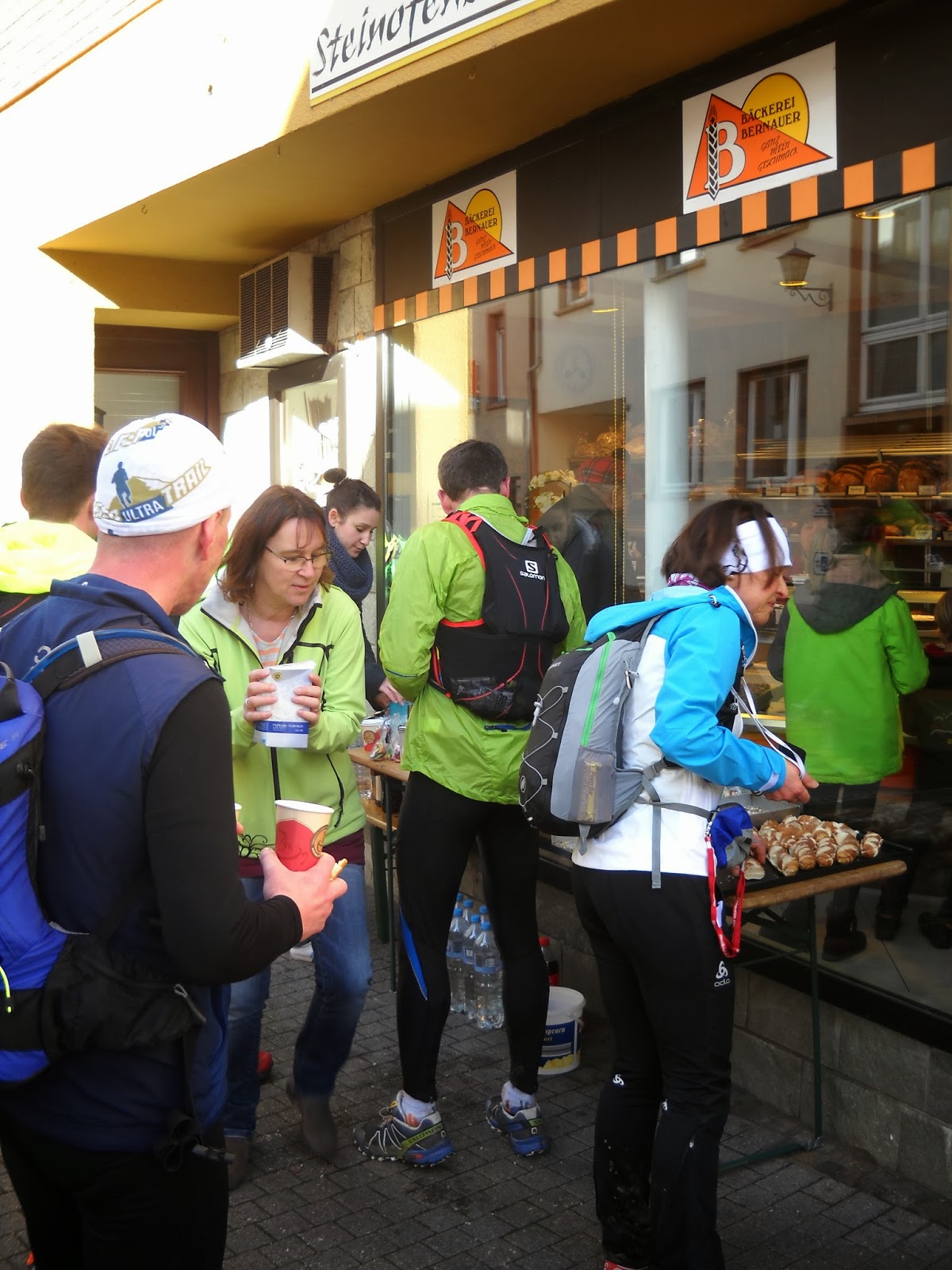 The aid station at KM 28 marked the start of the 14KM off-shoot loop that lies to the north of the main course.  This section of the course was composed of relatively easy trails and forest path characterized by a good amount of climbing.  I hit my low point of the day between Lepoldsgrund and Darmut when we left any generally established trails and moved straight up hill.  It was great to link up with Bianca Schwede and Thomas Lehmann near Darmut.  The three of us ran the remainder of the course together chatting and generally having a super time. 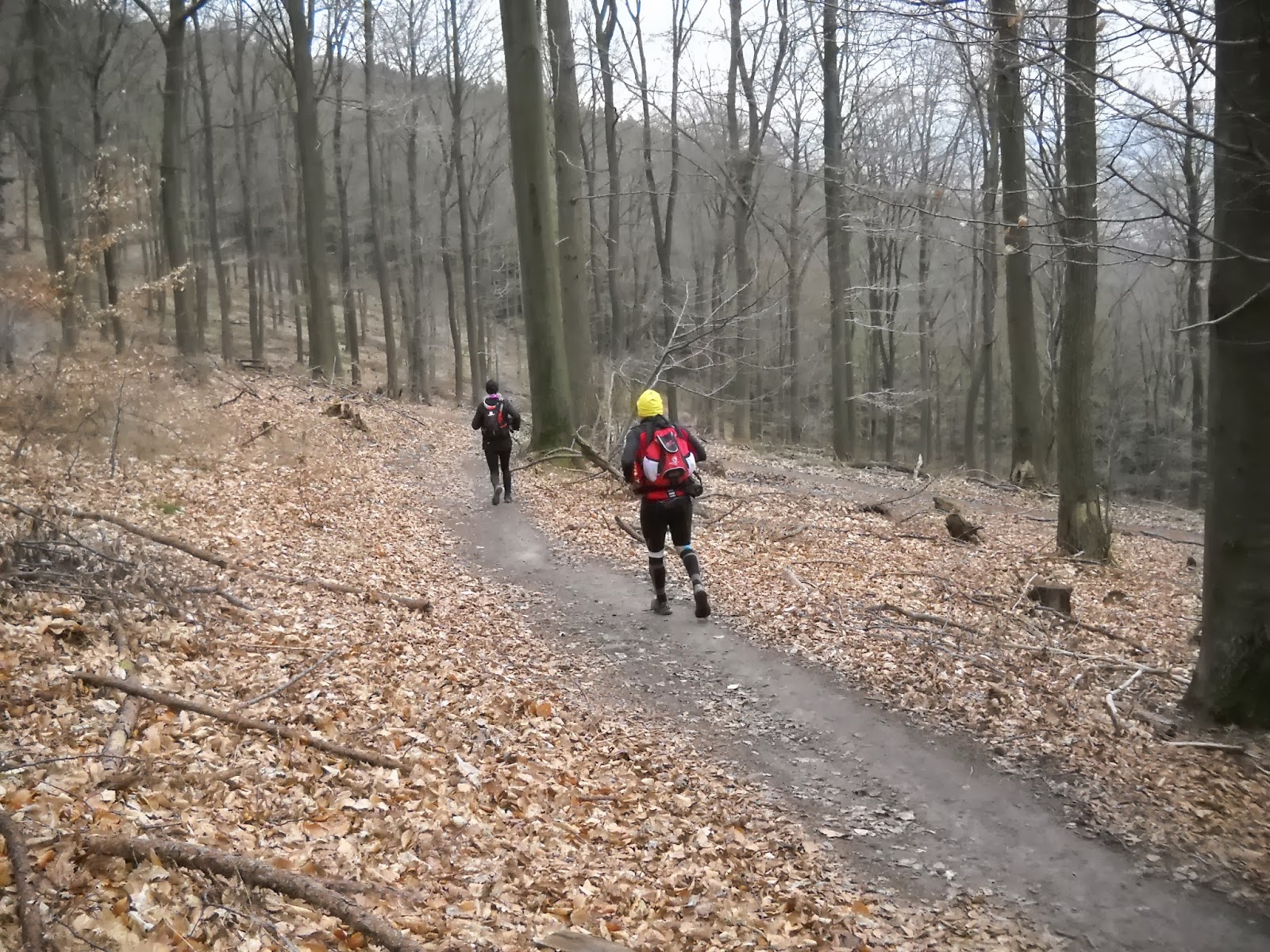 After completing the 14KM mini loop near the Dossenheimer Kopf we traveled up a slight incline to the Weissen Stein.  With six kilometers left to the finish we enjoyed the single track through the forest and brambles leading back into Dossenheim and the finish line at the Hotel Goldener Hirsch.  Inside the hotel we were greeted by applause, smiling faces, cake and coffee and a hot shower.  What more can you ask for? 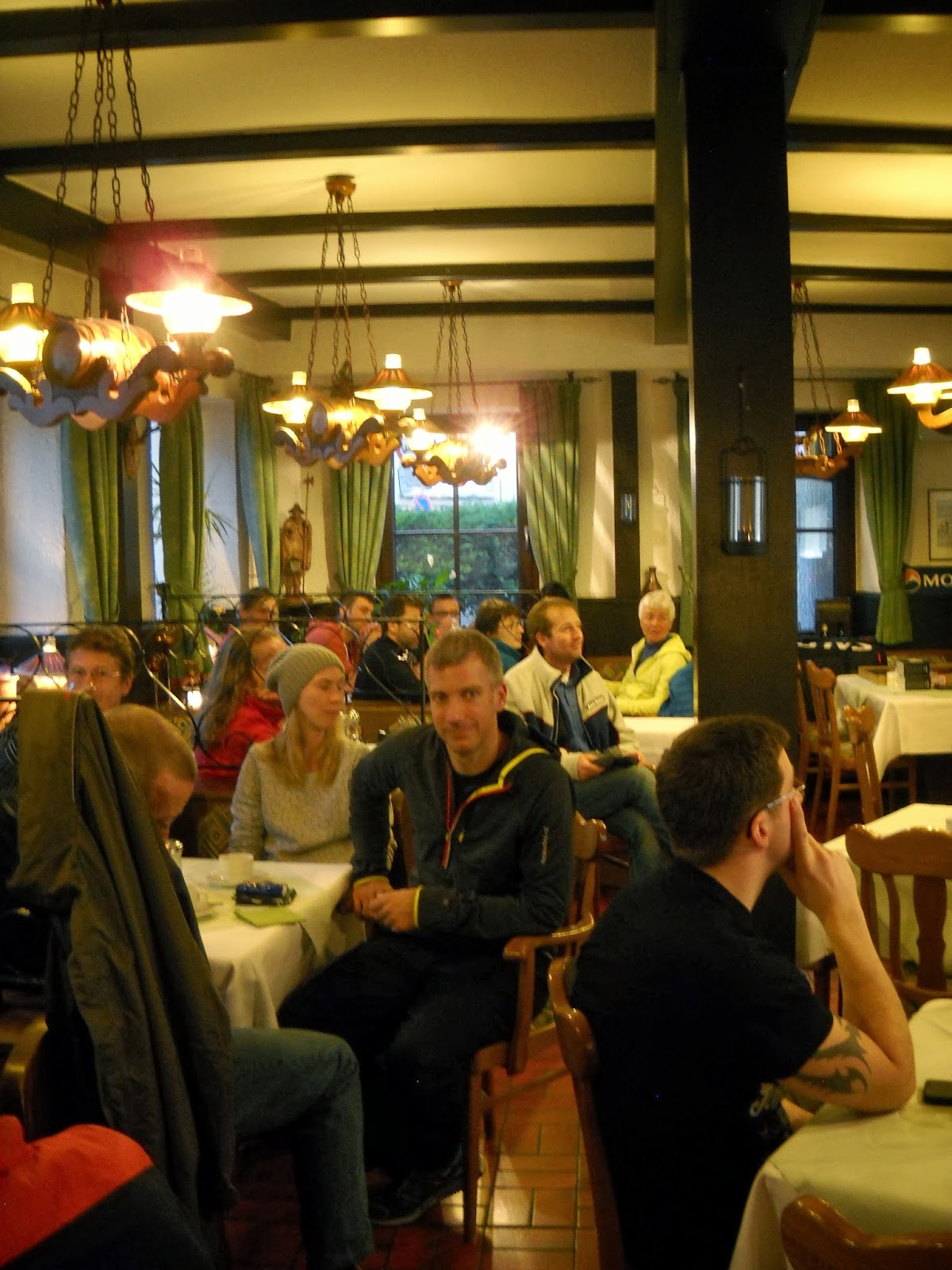 This challenging trail event came at a cost of seven hours and twenty-five minutes which in my mind was worth every minute.  Events like the JokerTrail are among my favorites.  They are generally “by invitation only” and the running field is relatively small which makes them friendly and noncommercial.

Each event I’ve participated in that was hosted by Micha has been a success.  They each get better with the experience of the last.  Lack of any trail marking; complete reliance on your orientation skills; and complete self-sufficiency ensure that there are no “gimmy” runs at an event hosted Der Hexer.  Ensure that you are well conditioned because the race course will include challenging surprises, twists in navigation, and the occasional opportunity to get disoriented.  Truthfully, my kind of event!

The JokerTrail 2014 included forty-eight starters and forty-seven finishers.  Stefan Helbig and Michael Arend led the race completing in 5:35.  Bianca Schwede took the women’s win in 7:25!  The limited race support and aid stations (total of three and half) were super.  Race volunteers were composed of racer friends and family and made a huge difference over the course of the day for all of us.  My thanks to all of the volunteers!  Registration for the 2014 JokerTrail cost 95 Euro and included a race tee-shirt, overnight with breakfast in one of the two hotels, aid station support, race completion certificate, a hot shower and cake and coffee following the event.