Leaves are falling all around, it’s time I was on my way
Thanks to you, I’m much obliged for such a pleasant stay
But now it’s time for me to go.  The autumn moon lights my way…

Led Zeppelin’s “Ramble On” provides a perfect introduction for the Pfälzer Weinsteig 100 Mile Ultratrail Race Event.  2017 marked the fourth running of what has become a fall ultratrail classic in the Pfälz in Germany.

This year’s Pfälzer Weinsteig fell on the weekend of 13 October.  The weather here in Germany leading up to the Weinsteig was simply amazing with mild temperatures, lots of sunshine and no rain.  Previous cooler weather and rain provided a beautiful tapestry of fall color. 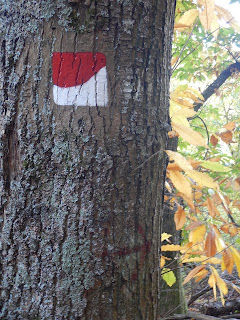 The Pfälzer Weinsteig Ultratrail takes place in southwestern Germany in the Pfälz, a region known for its vineyards, sandstone mountains and the culinary delicacy “sow stomach”.  A good third of the Pfälz is covered by the Pfälzerwald, Germany’s largest contiguous forested area.  The Pfälzer Weinsteig is in itself a award winning hiking trail that traces the mountainous backbone of the Pfälz.
The Pfälzer Weinsteig Ultratrail is a one hundred mile invitational trail race.  The race starts at the Deutsches Weintor in Schweigen-Rechtenbach and finishes at the Sport Club in Obersülzen.  The race is open for thirty-four hours with racers further challenged by relatively tight aid station cut offs.  A one hundred mile race poses enough challenges of its own simply given the distance.  What sets the mark here is the combination of the distance and delightful elevation change that occurs over the course.  There are 5,600 meters or 18,372 feet of elevation to climb and descend.  The Pfälzer Weinsteig travels along the sandstone mountain backbone of the central Pfälzerwald.  The course route is marked with red and white hiking trail markings.  These markings are however, a challenge to find and see in the darkness.  The event is semi-antonymous from a support perspective with aid stations situated twenty to thirty kilometers apart.  There are a number of additional unmanned water points and three deliberate check points that ensure that runners remain on course.  Because of my lack of familiarity with the area I was surprised to learn that the combination of the trail, distance, weather, elevation and other environmental factors contribute to a less than fifty-percent finisher rate on the Pfälzer Weinsteig Ultratrail. 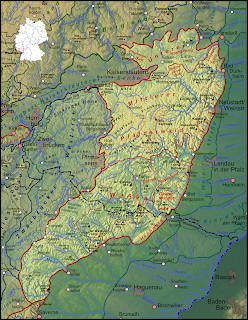 (Source: Wikipedia.  Accessed 171022)
I arrived in Obersülzen on Friday afternoon wound up because of work, the horrific traffic conditions on the German roads and this being my first attempt at the Pfälzer Weinsteig.  Greetings from old friends and new ensured that any trepidation was quickly whisked away.

Friday evening we got settled into the Sports Club in Obersülzen where a number of us would attempt to get a few winks of sleep between the inevitable snoring.  After setting up our quarters for the night we drifted to the restaurant and bar area to enjoy a bit of pre-race conversation, find a seat for the race briefing and dinner.  I was pleasantly surprised to see Simon, Elke and Wolfraum whom I’d not seen in what seems like ages.  We had dinner together and talked about the upcoming adventure.  I didn’t hang long Friday evening as I wanted to get a head start on getting my race equipment ready and intuition told me that I would pull the lucky straw and stay awake next to the loudest snorer – fact!  I should buy a lottery ticket with this kind of intuition.

Saturday morning could not have come soon enough…  I was up shortly before 0400 to finalize my equipment and have a bit of breakfast before getting on the bus to travel south to Schweigen-Rechtenbach and our start.  I road the bus to Schweigen-Rechtenbach seated next to and talking with Elke, but was uncertain how I was going approach the next thirty-four hours and with whom I might run.  In the early morning darkness and chasing the need to pee really badly I lost Elke, but found Simon again.  And so… 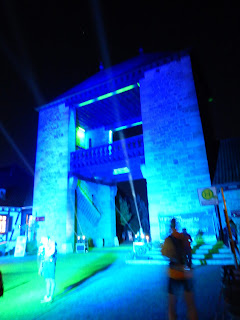 The 0700 Pfälzer Weinsteig 100 Mile Ultratrail start found Simon and I running together.  Simon and I had last spent any time together back in 2015 so this was a great opportunity to get caught back up and enjoy the start of a great race weekend.  We got caught up on the last couple of years and talked about loss, family, work, shoes, dream races and all the things that runners talk about when they run.

Simon and I got split up because of one of my many pee breaks – the coffee had made its way through me.  After I stopped for an alcohol free hefeweissen in a beer garden Elke and I teamed up at the second aid station and were to remain together for the remainder of the race. 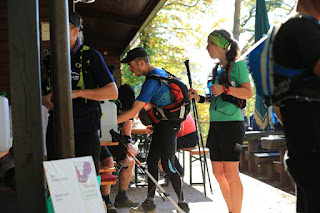 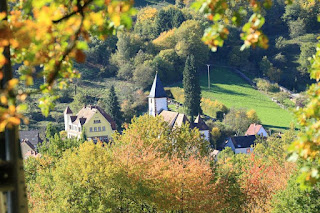 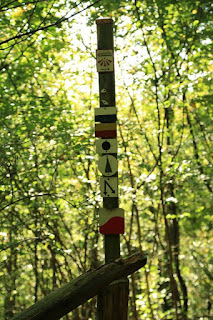 (Photo:  Laufticker.de)
Elke and I shared a tremendous adventure as the kilometers and unfolded under foot.  Athletes like she and Karen who sometimes trailed us, but generally led us, blow me away.  Elke and I made a terrific team that I hope to one day match back up again.  Although, she never admitted it, I hope that I was never rude or super negative.  Elke, if you’re reading this – please forgive me again for my propensity to “luft”.  There are things that happen on the trail that should stay out there on the trail (smile). 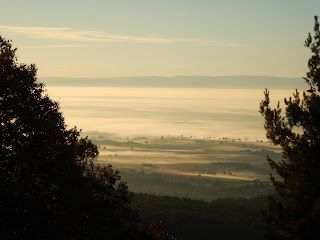 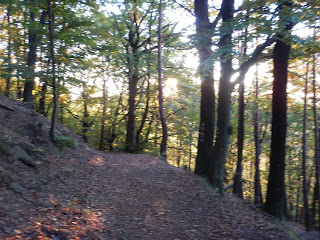 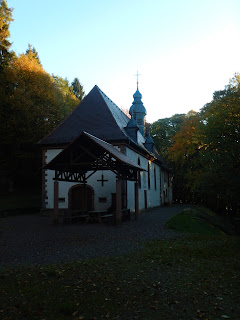 A hundred miles is a fickle playmate.  Running a hundred miles is joyful; peaceful; powerful; and at times, simple bliss…  In the blink of an eye the magic of 100 miles will shift and become pain; stress; sadness; darkness…  My darkness usually occurs, well, in the dark.  It’s in the hours after two in the morning that I slip into headlamp hypnosis and go to my deep dark place.  It’s here that I battle with suffering and frankly, the edge of sanity.  (Elke, forgive me again if I was talking in my sleep.  Although you and I were physically alone, I swear that there was a third runner with us that drifted in and out of my reality.) 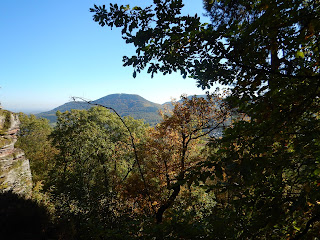 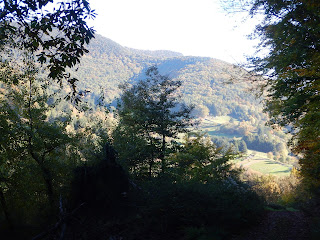 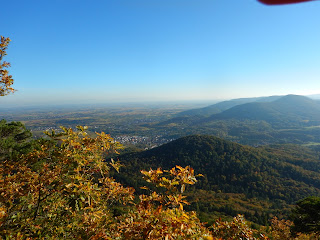 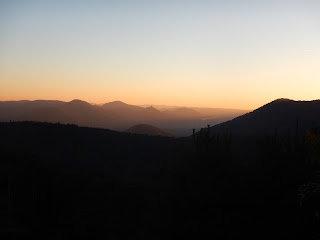 Thich Nhat Hanh teaches that suffering brings about understanding and compassion, which are the true foundations of happiness.  For me this thought embodies part of the magic of trail running and pushing out to one hundred miles and beyond. 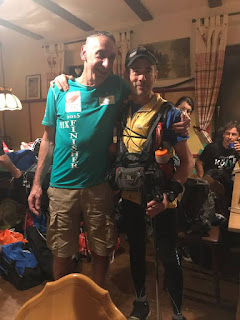 (Photo:  Christine Bruhn)
Sunday morning’s dawn saw the departure of my additional running mate and the passing of darkness.  As dawn approached we found ourselves shy of Deidesheim and running into a dense fog that effectively denied us the sun.  This was not necessarily a bad thing as it motivated us to return to elevation and the sun.

My outlook improved dramatically after we put Deidesheim and Bad Durkheim behind us.  I don’t know where it came from, but this is where I caught my second wind.  Aid station five was a wonderful stop.  I don’t know if I’ve ever been that completely pampered in an aid station.  Many thanks to the gentlemen that made me multiple sandwiches (bread, lots of butter, salt, meat spread and pickles.  Fantastic!) and the alcohol free hefeweissen for breakfast!  Oh – And the heated toilet paper was pure bliss!  Frank and his volunteer teammates in aid station six were also fantastic.  I wish that we could have stayed longer, but Elke and I had a rendezvous with a finish.

Rolling into the stadium in Obersülzen was fantastic.  Günther greeted us like royalty and ran the final loop around the football field with us oblivious to the football game that was playing out its final few minutes. 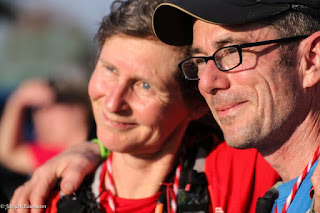 (Photo:  Jürgen Baumann)
In 2017 Max Kirschbaum and Bianca Logé rocked the Pfälzer Weinsteig finishing in 20:52 and 22:58.  Simply phenomenal performances over this challenging, yet obviously, very runnable course.  Elke and I finished in a very proud 33:42!

The Pfälzer Weinsteig Ultratrail is a truly amazing event.  I am deeply impressed by its warm and friendly atmosphere.  Günther and Christine Bruhn are the hosts, race directors, logisticians, coaches, volunteer coordinators and just down right wonderful people.  One of my favorite things about running trail and endurance events is being among the other runners on the same journey.  Many thanks to all of the people that made the Pfälzer Weinsteig Ultratrail possible.  Race volunteers and people that work aid stations blow me away.  To see you working a station for twelve – twenty-four hours is incredible.  Chapeau! 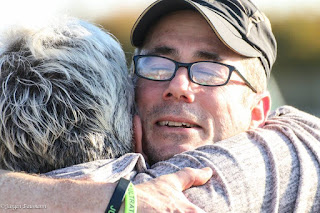 Got no time for spreadin’ roots, the time has come to be gone
And to our health we drank a thousand times, it’s time to ramble on…