“No!  No!  The adventures first, explanations take such a dreadful time.”  - Lewis Carroll

Oh, the dread of writing the race report…  I’d rather be out running the Brocken-Challenge (BC).  Since we’ve got to wait until 11 February 2017 to even consider that a possibility I’ll spend a moment and share my experiences with my eighth running of the BC.

A few words of introduction about the Brocken-Challenge...  The BC is first and foremost a charity event.  The costs associated with the race entry fee and various race goodies like the event tee-shirt are collected to benefit several specific organizations and functions.  The BC has been characterized as an “experience”, “the hardest run in northern Germany” (Norddeutscher Rundfunk), and last but not least as an adventure.  My experiences and adventures over the past eight years have been defined by weather extremes, somewhat different course routes, course distances, different means of returning to Göttingen (GOX) and so many other unpredictable factors.  You may have also read how I’ve described the BC as a “Family Affair”, and “Friendship Reunion”.  In the end it is all of this and much more.  It is simply a wonderful event that I look forward to over the course of my entire running year. 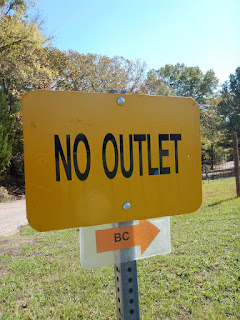 In 2016 we were graced with phenomenal weather conditions with temperatures just below or right at freezing, and blue skies and sunshine throughout most of the day.  The starting field was split right down the middle with fifty-percent veterans and fifty-percent “newbies”.  This split provided an opportunity to run with and see old friends and to meet new ones.  I spent the day running with an old friend, Lutz who was a newbie to the BC. 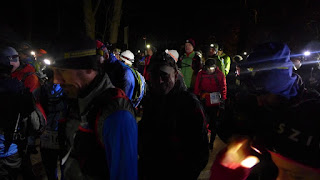 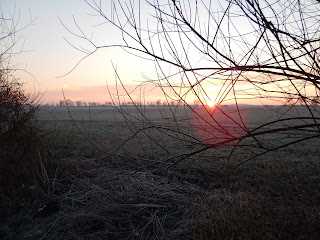 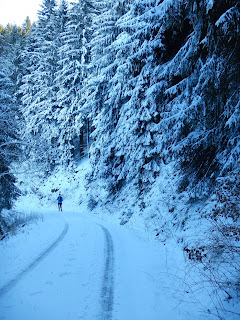 Much like the 2015 BC, I spent much of my winter not training.  Going in I knew that the rumbling going on in my gut was not pre-race butterflies – I was not mentally or physically prepared to run the 2016 BC.  Like many of you, I often struggle to find a balance between family, work and running.  This event is special and is not one you would want to DNS if there’s any chance of physically starting.  With these thoughts in mind I headed to GOX on Friday afternoon.  Still with a bit of trepidation that would last until we lined up at the starting gate, but also with much anticipation of what the day would bring.

- Enter the lottery for the 2017 Brocken-Challenge.
- Running an ultra is always funner when you run with a friend.  Lutz and I have been running a couple of years together and I attribute much of the great experience I had on Saturday to him.
- Distance is what you make of it.  This goes back to what I’ve mentioned here before and that is, “Never attempt an ultra as a whole.”  The right amount of motivation and training were absent for me going into the 2016 BC.  In order to accomplish the whole I broke the BC down into it its distinctive parts split up by aid stations.  Doing so allowed me to manage the whole without being overcome by the WHOLE.
- The Brocken-Challenge is less a race and more an event shared by friends that like to take part in this great event.
- There is significant truth in the Brocken-Challenge motto:  “The man who masters himself is delivered from the force that binds all creatures.” – Goethe  That quote captures the essence of adventure. 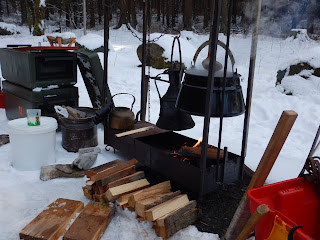 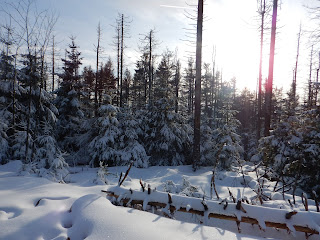 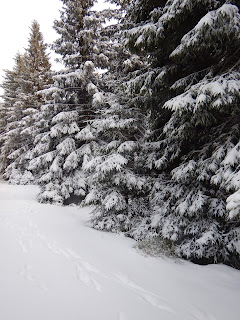 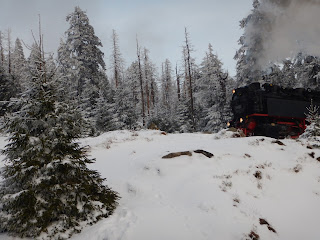 For the uninitiated and curious…

The Brocken-Challenge route travels from GOX to the summit of the Brocken Mountain over forest and farm roads, hiking and cross-country ski trails.  The route can vary each year based on the amount of snow in the Harz National Park.  The course is extremely well resourced with seven major aid stations and one water point.  Aid stations are found within the villages of Landolfshausen (10.9KM), Rollshausen (21.8KM), Rhumequelle (30.7KM) and Barbis (Dreymanns Muehle) (42.5KM).  From the half-way point at Barbis the course transitions into the ULTRA portion of the event with a water point at Jagdkopf (53.8KM) and aid stations at  Lausebuche (63.1KM), Koenigskrug (68.5KM), Oderbrueck (72.4KM) before proceeding to the finish line on the summit of the Brocken.  The leg between Barbis – Jagkopf – Lausebuche is best characterized as a Gut Check  as the Jagdkopf is only accessable by foot with no opportunity to drop at this water point if you were to become so inclined.

The Brocken, 1142 meters or 3747 feet, is the easternmost mountain in Northern Germany and is surrounded by the Harz National Park.  The mountain provides a unique terrain feature that is completely exposed to the North German Plain and the weather patterns that transition over it.  This exposure contributes to a microclimate that resembles that of mountains of 2,000 meters or higher.  The summit above the tree line tends to have snow cover from September to May and fog enshrods it for up to 300 days a year.  The mean annual temperature is only 2.9C with the highest recorded temperature measured at 29C on 20 AUG 2012 and the lowest recorded on 1 FEB 1956 at -28.4C.  In 1973 the summit was covered in snow for 205 days of the year.    The Brocken was ensrowded in fog for 330 days in 1958.  The highest wind speed across the summit was measured at 263 km/h on 24 November 1984.  Traveling along a straight line east, the next prominent geographic terrain feature of any signifcance are the Ural Mountains in Russia!

For the statisticians out there…

In November at the time of registration there were 448 lottery applications.  On 13 February there were 177 starters including starter number 4x4, Clarkson (Runner in the middle below).  Eighteen percent of these starters were women.  Of these starters 162 finished (91.5%). 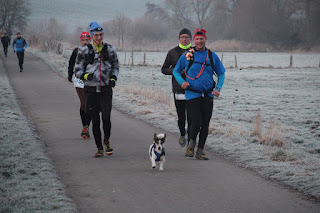 
The top finishers included Nicole Friedrich in 8:38 and Florian Reichert in 6:52!

At the last aid station at Oderbruck (72.4KM) one of the volunteers thanked me for running the BC.  I turned her compliment on her and thanked her for supporting us.  BC aid stations and so much more are managed and accomplished by volunteers that not only give up their Saturday to stand around in often extremely uncomfortable weather, but go to extremes to wait on finicky runners.  This is a unique group of people that make this a superior event.  My personal thanks to each and every member of the BC team in front of and behind the scenes.  This would not be such a special event without you. 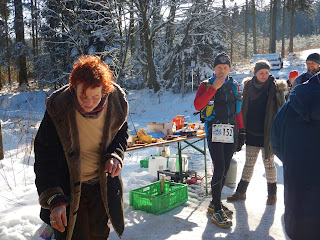 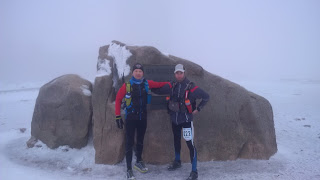 Email ThisBlogThis!Share to TwitterShare to FacebookShare to Pinterest
Labels: Brocken-Challenge